Amortisation is a routine decrease in value of an intangible asset, or the process of paying off a debt over time through regular payments

Keep track of the value of your business assets with amortisation applied automatically through your accounting software. Try Debitoor free for 7 days.

Amortisation usually refers to the expensing of intangible capital assets (intellectual property: patents, trademarks, copyrights, etc.) in order to show their decrease in value as a result of use or the passage of time.

Decreasing value can be the result of consumption, expiration or obsolescence (when a newer model is released), for example.

Amortisation is most commonly used to describe the routine decrease in value of an intangible asset.

A corresponding concept for tangible assets is known as depreciation. The idea of amortisation and depreciation is that the cost of an asset is spread over the period of time that it will be of use or its useful life.

If the full price of an asset were to be recognised in the period in which it was purchased, then that year’s expenditure would be overstated incorrectly while expenditures throughout the remaining years, which were still obtaining benefits from that asset, would not be affected and therefore would be understated.

An impairment loss is a loss that represents a permanent decrease in the value of an asset.

When used in the context of a loan, for example a small business or bank loan, amortisation refers to the repayment of the loan spread out over a series of payments based on a schedule. Initially, the payments mainly cover the interest charges but provides a schedule for total repayment.

Determining and tracking depreciation of assets is simple with Debitoor. Asset amortisation is automatically calculated using the straight-line depreciation method once the estimated value is entered.

A loan can be added in Debitoor by creating an additional bank account for the loan and entering a negative balance. This provides a more accurate overview of the financial standing of your business and allows you to keep accounts and payments organised. 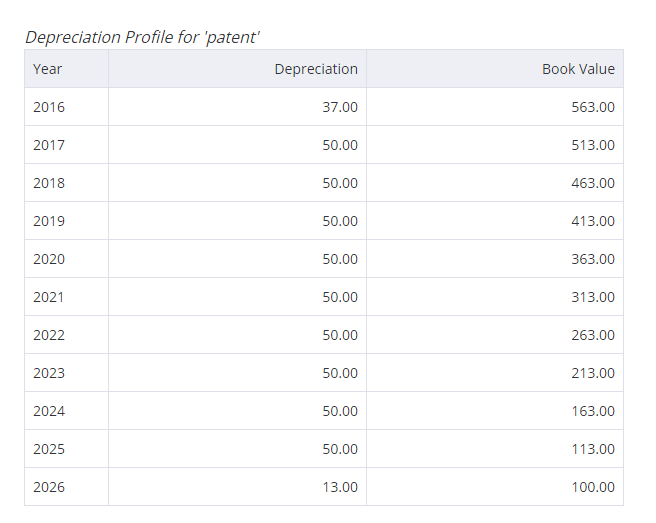