Are you on top of your Self Assessment?

As you might know by now, it is Self Assessment time and even though you can submit yours from April on, most returns are filled out online in December and in January. So, if you are about to start filling your self assessment, I recommend you to watch Ruth Owens's - HRMC Director General Personal Tax - video where you will find great advice on submitting your self assessment.

As you can see on the following chart, created by HMRC, in 2012, the majority of returns were filed in January, and the trend continues until today. 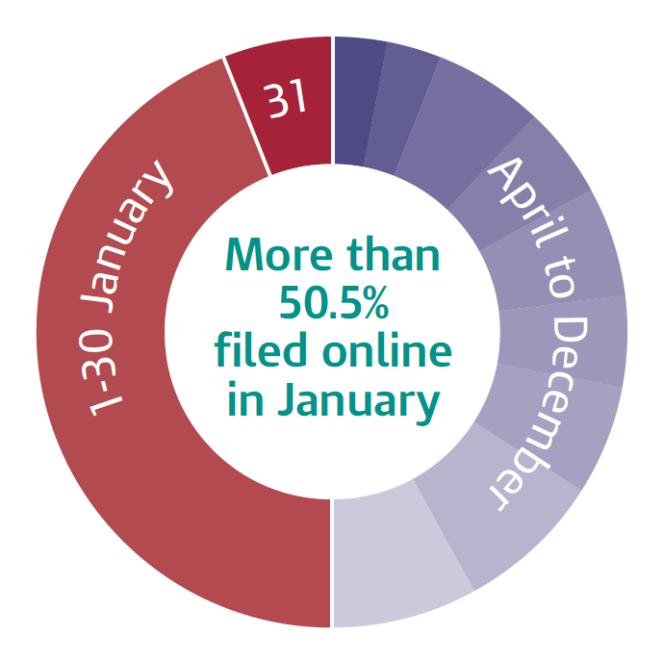 Around one in nine (11%) of the 560,000 people in Inner London who had to send in a tax return last year didn’t do so by the relevant deadline – 31 October for paper returns and 31 January for online submissions.

Taxpayers in the rest of the English regions fared better. The most punctual were in the South West, with only 6% of their one million tax returns arriving late. The other English regions, as well as Wales, Scotland and Northern Ireland, all registered 7% of late tax returns, which was the UK national average.

10 most common online self assessment issues

The deadline of the 31st January 2016 is fast approaching for filing 2014/15 Self Assessments online, thousands will probably file late and 50% will leave filing until January.

Here are 10 of the most common problems, issues and errors that come up:

You can also have a look at HMRC's video on How to complete your tax return online.

There are only a few days left to file your Self Assessment Return for 2015 and if you haven’t done it you might be starting to panic! a common reason for last minute filing is being unable to get the information to enter on the return, so what can you do?

Returns which include provisional or estimated figures should be accepted provided they can be regarded as satisfying the filing requirement.

If you want to know more, check out HMRC's info on provisional and estimates.

Self Assessment Payment – Shipley or Cumbernauld

For all those struggling to work our whether to make a bank transfer to HMRC Shipley or Cumbernauld, your payslip tells you which HMRC account to use. If you’re not sure, use HMRC Cumbernauld. You must use your UTR as the payment reference.

If you make a Faster Payment this will clear the same day if the amount is within your bank’s limits.

Get help from the Association of UK Accountants

We, at the Association of UK accountants, we can help you claim tax allowances and file your return. You can contact us anytime on Debitoor's accountant list or directly on our website. We are ready to help!