What will a no-deal Brexit mean for UK businesses?

With less than 2 months until the transition period ends, there has yet to be a deal between the EU and the UK. It is becoming increasingly possible that we will be leaving the EU without a deal. In this article, I will explain what this means for UK businesses in terms of EU customers, suppliers, imports, exports, and VAT. 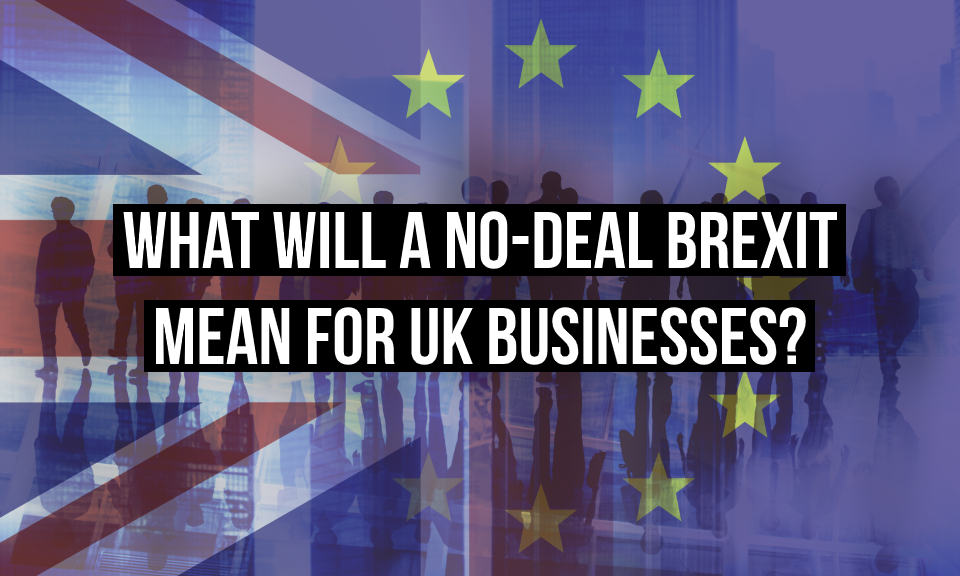 Although January 1st 2021 is approaching fast, Brexit talks are nowhere near completed. Even if a deal is agreed upon in the coming weeks, there will still be talks and negotiations for months, and maybe even years to come.

What is happening with Brexit right now?

As of January 31st 2020, the UK left the EU and entered a “transition period” lasting for 11 months until January 1st 2021. During this time, the EU and the UK were to negotiate a “deal” which would apply after the transition period.

The negotiations are mostly about trade, but also many other issues including the movement of people, state aid, travel, finance, and border issues (specifically between Northern Ireland and the Republic of Ireland).

What does a no-deal Brexit actually mean?

In a no-deal scenario, all UK imports and exports will be subject to tariffs and customs checks. We will likely see currency fluctuations and the prices of UK goods increase.

There is still a lot of uncertainty around what exactly will happen. The UK is still trying to pass its “Internal Market Bill” which has been viewed as breaking international law. If the bill is passed, then this may result in a hard border between Northern Ireland and the Republic of Ireland, as well as tensions between the UK and many other countries.

The Internal Market Bill was introduced to allow barrier-free trade between all 4 UK nations. However, the Brexit withdrawal agreement stated that Northern Ireland would remain in the customs union and that the border would instead be placed in the Irish sea. This meant that tariffs would be applied on goods entering Great Britain from Northern Ireland (and vice versa).

The UK and the EU have already agreed that in a no deal scenario, Northern Ireland would continue to be in the customs union until an agreement is reached surrounding that aspect of Brexit.

What should my UK business do to prepare for a no-deal Brexit?

At this stage, it’s a waiting game to see if a deal will be reached. If by December no announcements have been made, then you can assume that it will be a hard Brexit and start preparing accordingly.

Several businesses have already moved their operations and staff to EU member countries in anticipation of a no-deal scenario.

Please be aware that the following information is for Great Britain businesses only. For Northern Irish businesses, please go to the UK government website for more information.

Get an EORI number

Businesses should apply for an Economic Operator Registration Identification (EORI) number which will be needed if you supply goods to EU countries. The EORI number is a 12-digit identifier for non-EU countries trading within the EU.

Depending on the outcome of the Internal Market Bill, Northern Irish businesses who only trade to the Republic of Ireland may not require an EORI number. It is still advised to apply for one just in case.

If your business already has an EORI number, then you must check that the number starts with ‘GB’. If it does not start with ‘GB’, then you will need to apply for a new one.

You can apply for an EORI number from the UK government website. It takes about 10 minutes to apply, and you will receive your EORI within 5 days.

If your business is VAT registered in the UK, and you have your EORI number, then you should familiarise yourself with the C79 certificate. This is issued monthly by HMRC and outlines the import VAT paid each month.

HMRC issues these documents to any VAT registered business that includes their VAT number on import declarations. You can then use this information to fill out your VAT Return.

Customs declaration for exports to the EU

When Great Britain leaves the customs union in January, you may need to complete customs declarations when exporting goods to the EU. You can do this yourself, however, creating a customs declaration can be complicated, so first check if you would prefer to hire someone (customs agent or courier) or use a software to do this for you.

If you would prefer to do it yourself, you must register for the National Export System for export declarations. You can do this on the UK government website with your EORI number and Government Gateway ID. You must submit the declarations prior to the goods arriving at the port of departure.

If you send your goods by post to EU countries, there is a different procedure. You will need to complete a customs declaration at the Post Office and attach it to the package. If you are posting commercial goods, you will need to attach a commercial invoice.

Accounting considerations in a no-deal Brexit

A no-deal Brexit will likely cause some headaches for businesses and sole traders based in the UK. Therefore, it is important to ensure that you keep your books up to date and have the correct information to report to HMRC.

Accounting processes will likely change next year, specifically with reporting VAT and schemes like the VAT Mini One Stop Shop.

Businesses should anticipate shipment delays in the new year in a no-deal scenario. You should plan ahead to ensure an even cash flow and an appropriate inventory in the case of delays.

For the time being, I would suggest keeping up with the news to see if any Brexit information is announced. You can find the most recent information on the UK government website, and we will be posting updates on our blog.