Trunk based development was broken for us. We fixed it with Koritsu.

What is Trunk Based Development?

Trunk Based Development and CI dictates aspects of how you use version control and your CI-server. It has numerous variants, but the rules that seem to be generally agreed upon are:

What problems does Trunk Based Development solve?

The main problem that Trunk Based Development directly solves is the elimination of Big Scary Merges. There are plenty of stories of people working in feature branches for months and months and the horrors that occur when it’s time to integrate the feature branches into trunk. An additional problem that has been claimed solved by Trunk Based Development is that it allows you to do refactoring. This is a variant of the Big Scary Merges, as refactoring code in long-lived feature branches will potentially result in a merging nightmare.

How was Trunk Based Development broken for us?

We used the Trunk Based Development inspired process for a number of years before discovering a better solution. What follows are some of the problems we experienced with our process:

How we fixed our process

To fix all the problems described above, we applied some principles:

Based on these principles, we came up with what we are calling Koritsu. We chose that name because Kōritsu is the Japanese word for efficiency, and for us Koritsu has been the most efficient development process any of us have ever tried. Plus we heard giving things Japanese names is making a big comeback. At least we think it’s better than this method of naming things

I explain Koritsu in this video from the GOTO conference in 2015. We’ve been doing Koritsu for a while now with success:

These are the central components of Koritsu as we practise it: 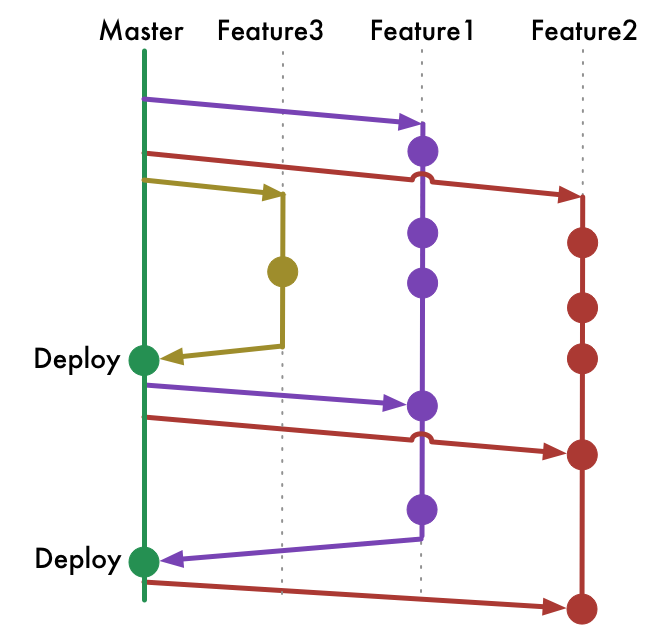 All kinds of merges or branching we do is included in this picture. We do not branch off of feature branches, we do not merge feature branches into each other and we never need to rebase.

Koritsu can seem a bit daunting and complex. It's actually very simple for the developer. You just do your work in a branch and deploy it when you are ready, with a single command line command. That's it, nothing else to do. The rest is automation details, that you don't need to worry about in your normal daily work.

What problems does Koritsu solve?

Koritsu is not optimized to avoid Big Scary Merges like Trunk Based Development. Instead, it’s optimized to never interrupt or block other developers. We have had ten to thirteen developers working with Koritsu for several years, and although situations wherein interruption of other developers do happen, they are very rare. Most of the time, everyone is working in complete parallel without worrying about or even coordinating with developers working on other tasks. We still participate in valuable knowledge sharing, for example: in our daily standup.

So what about Big Scary Merges, when you allow feature branches to live for a week? It’s not been a big issue even a single time in the years we’ve worked with Koritsu. We have had two or three instances where there was some work involved in a merge, but we’re talking about an hours work at most. So in short: Big Scary Merges are a non-issue for us. To be honest, I do not understand the very vocal proclamation many experts are making that you always have to push code to trunk at least once a day. I understand that it’s a reaction to some disastrous experiences with Big Scary Merges, and can be needed. But to me it seems like sometimes it can be an irrational overreaction that can introduce a lot of unnecessary extra work and complexity in the daily work of development.

If we reiterate the problems described with our previous process and approach them with Koritsu the following picture emerges:

We’ve been working with Koritsu since early 2014, deploying to production 10 times or more every day. Moving to Koritsu from our previous processs, along with some other process improvements increased our measured productivity by 40%. More than that employee satisfaction increased. We’ve made no major changes to the process for years. There simply is no pain to fix. For us, Koritsu runs super smooth with no issues that need to be addressed. Your mileage may vary, Koritsu is not for big projects with a lot of developers, but it could possibly work for you too.

The latest thing we have done with Koritsu is move our entire CMS to a homegrown solution, where all assets are in git. All content editors work in markdown and pug and push their new content with ready builds. About 13 people who are not developers contribute content regularly. Each change is run through literally millions of content and SEO-tests before they are allowed into trunk and automatically deployed. Again Koritsu still works exceptionally well in this scenario.

Check out the article An Automated Git Branching Flow if you have maintenance branches. Our ready-branches approach was inspired by this.